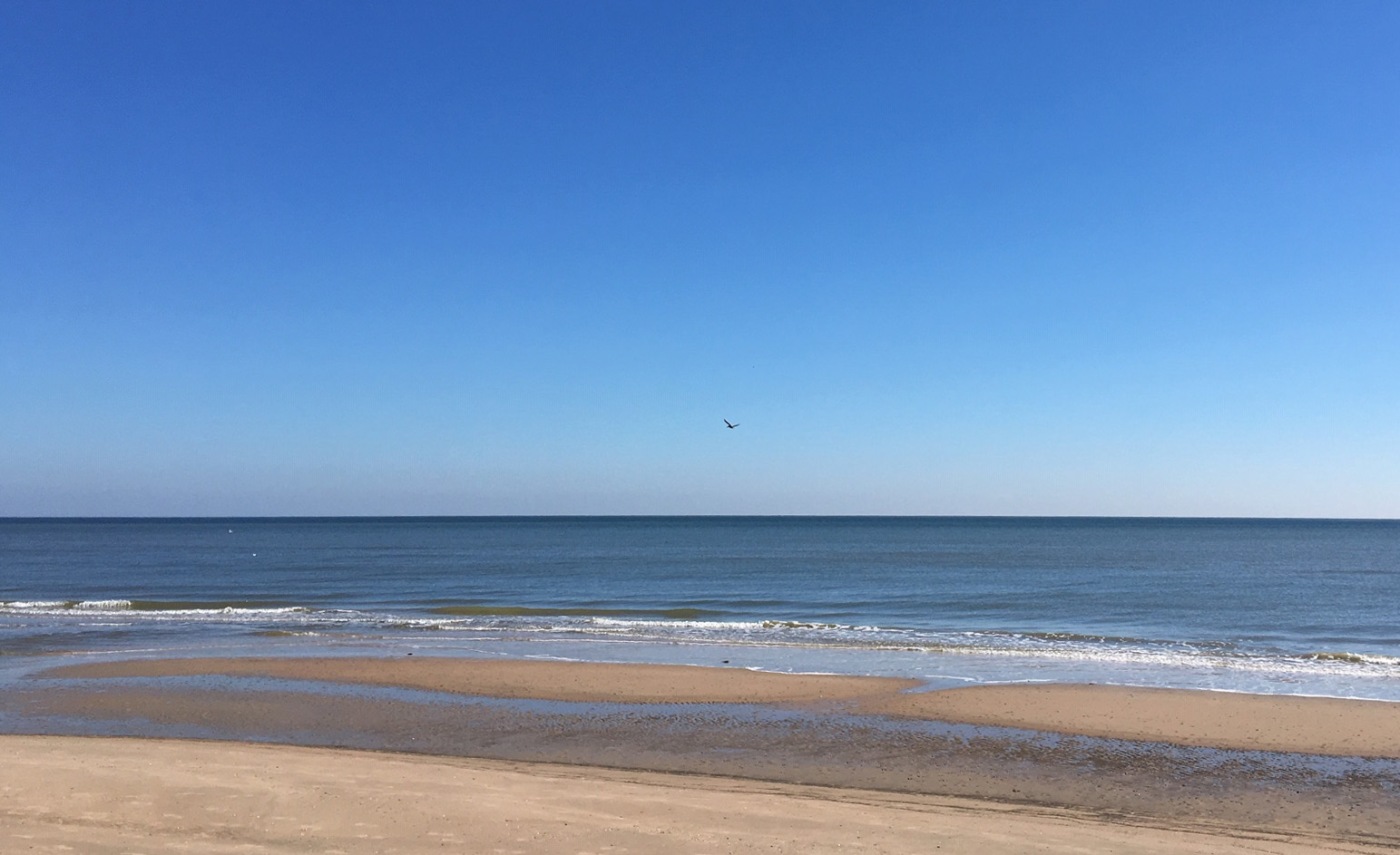 The big blind dog, the husband, and I sit in the vaulted den, windows open to the dry northwest wind on a clear day. The surf has been blown flat and the slightest shore break caresses the sand. Now and then, waves kicked up by a distant boat or breeze wander in, slap the first sandbar, then die in lazy foam on the long stretch of beach exposed at low tide.

In this winter calm, seagulls are quiet, looking almost bored as they balance on one leg and face the sea. Winter blackbirds—grackles, starlings, the odd cowbird—have taken over rabble rousing duties, gathering in flocks of a few dozen on power lines and posts to await handouts or grass seed and insects glistening in morning dew. Their whistles, whoops, croaks, and watery whirs echo around the island like childish taunts. Local dogs announce the occasional car on our street, infrequent this time of year.

A few times a day, the engine of a cargo ship or tanker on the Old Brazos river rumbles with a behemoth’s pulse.

Before this near-break-less quiet, soft sand yielding only to bird feet and coquinas, there had been storms with winds that rocked our stilted home and jostled us in our beds. Lightning streaked into the dunes, startling us and stuttering the power.

The house swayed and creaked. Pictures and bookcases tap-tapped against the walls. Outside, unseen bumps and thuds became guessing games. Trashcan? Potted plant? The neighbor’s loose awning that threatened to break free and sail for weeks yet somehow held as it cracked like a stiff whip against its frame. Somewhere on our own roof, a vent cover puffed irregularly like a sick valve. The sea roared and churned, waves indistinguishable.

On such days a poorly stacked coffee mug can take an unfortunate tumble from its sink perch and shatter. A hastily stored pot can settle in the cabinet and frighten the dog.

On such days, it feels as if the house is a living being, straining against the wind, planting its pilings ever deeper, leaning its siding windward and howling, “No!”

On such days, I love the island as deeply as I can possibly love it

On such days, one is reminded of the sea’s power and to be thankful for those calm days.

So, we three settle in with the lazy foam and the gentle slap, slap of the calm northwest wind day and we wait for the island symphony to build again.

One thought on “Surfside Symphony, First Movement: Pianissimo and Forte”